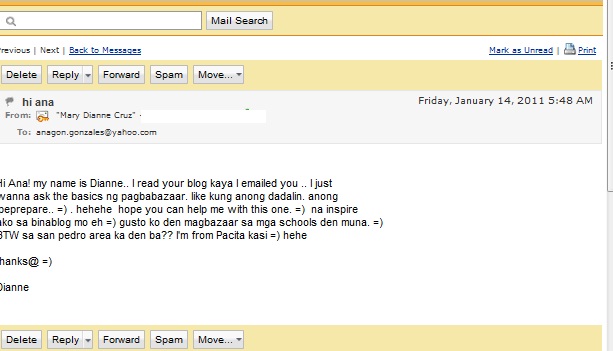 I decided that, instead of just emailing her tips and tricks I've learned from participating in bazaars (my first time was in St. Scho Manila's Family Day, January 2006!), I will compose a blog entry instead! :)
Again, I am not an expert when it comes to bazaar selling, but I guess the many times I've tried out this thrilling, tiring, and definitely fulfilling marketing of my goods gave me some useful pointers on the basics of bazaaring! :) Are your ready to earn some moolah!??? :)) Here goes:
(1) Arrive in the area at least one hour before the gates open to the public. The organizers often give you the ingress time. It's often too early, so you have to estimate for yourself how much time you will need to set up your stall. I always use racks and screens that I still have to tie together, then one by one hang my necklaces, so I really give allowance for my set-up. Kundi natetense talaga ako, at sobrang nagiging mataray! Haha! :D
Boxes and plastic bags during the Ateneo Eagles of Hope 2008, na sobrang nakakainit ang ulo dahil umulan! :P

(2) I love holding bazaars inside schools because canteen foods are the cheapest! But there will be other bazaars like St. James Cuenca bazaar, Candy Fair, or the Brown Bag Market where the foods are the usual ones we see in malls. Bring your own water so you don't have to buy anymore. It's ok too to bring your baon, but I also love trying out the specialty foods I encounter in the different venues I've been too. I tried out the YUMMIEST vegetarian siopao during my Cuenca Bazaar stint: Pesto Veggie from Gourmet Pao! :)

(3) Pre-Bazaar date, consider if the organizers will provide for the tables and chairs. You might just end up standing the whole day! :) Also, is the venue airconditioned or outdoors? Organizers often charge if you'll be using electricity for bringing a charger or your own fan.
Outdoor bazaar in St. Scho:

(4) I want to be a bazaar sweetheart, hahaha! I may be an introvert, but I always try to be friendly with my neighboring stalls--may the one manning it is the owner or a hired ate and kuya. Often times when I have to go on CR breaks, or I need to buy my lunch, or when I need barya, the neighbors are always the people I can turn to. Shun pride and competition! :)

St. James Bazaar 2009 neighbors...and friends! :)
(5) Here's one thing I've learned from my bazaar experiences: the most excruciatingly BV parts are the ingress and egress. Sometimes the venue has the most faraway parking that you have to CARRY your HUGE boxes, mannequin, accessories holders, etcetera--pabalik-balik from your car to your assigned stall.
Lucky are those who have their manongs and drivers, but in my case, it's only me and my man--my daddy! So save your energies by having those rolling cases or a trolley. If only kasya sa koche, I'd love an airport trolley! Haha! For now my maleta and the improvised table with wheels will do.

Supportive dad during ingress and egress!

(6) For those who sell fashion items like me: It may not sound so important, and I often times forget to follow this too, but do try to model your products by wearing a piece or two while manning your stall. Maraming nagtanong sa akin about my twisty hair accessory when I wore it! Other than that, do wear something comfortable yet still stylish. :)
Making new accessories on the spot catches the attention of passing buyers! :)

(7) Another essential: Don't forget to bring your brand signs or tarpaulin, plus your calling cards or flyers with complete info on where they can catch you even after the bazaar.
2007 Candy Fair with the sign I made myself! :P

Also, don't forget your: Money bag/box, price tags/signs, barya, and calculator! :P
(8) For me this is also an essential haha: Bring something that will entertain you during the "dead times". There will always be those gruesome hours when not a strolling buyer is in sight. To keep you away from boredom (or depression! :P) bring games, music, your laptop where you can watch a movie or surf, etc. During the Port88 Bazaar, Ana and I wasted time playing PANTS!

(9) Things to consider before saying yes to a bazaar invitation: RATES, SEASON, LOCATION, TRAFFIC (of buyers), and MARKET! That's why I love school bazaars because they provide the lowest rates, and my target market is there: high school and college students! Kaya kahit hindi season (November-December), ok parin ang kita! Same with the teen-infested Candy Fair! :) Meanwhile, St. James and other Christmas bazaars may be expensive, but the event is well promoted plus the dates are always set during the bazaar season!
Candy Fair just screamsss TEENAGE CROWD!!! :D I just have to be there every year!

Candy Fair 2010
(10) Another thing that I always forget: list your sales! If, like in St. Scho and Candy Fair, it's hard to track everything because of a mob of buyers, at least make sure you know how much money you had before the selling started.
(11) Again, for those who sell fashion items like me: don't forget to bring a MIRROR! :D

Yuletide Souk 2009, Rockwell.
(12) To make your booth pretty, plus, to give your potential buyers a preview of how your items will look like when worn, bring pictures from your past photo shoots, and even clip outs of magazine features! :)
(13) Another one that I've learned through all bazaar stints, do not bring out all your stocks (unless your space is huge). Buyers do not want a crowded or topsy turvy stall.
Maximizing the tiny stall in Rockwell (I have THREE ka-booth share!)--through levels! :P

(14) Speaking of stall, it depends on what you're selling, but I've learned that nice racks with dividers will keep my necklaces from getting tangled as compared to just putting them flatly on the table. Invest in nice racks or tables or baskets--which you'll use in future bazaars anyway. Bring your own table cloth too, just to be sure in case they don't provide one for you. I also bring a carpet for my booth, just because. Hehe.
Poor stall display! :D Hah! First Candy Fair Experience, 2006!

Again: Sometimes you may have the best products, but that's just not enough. How you present and market them is as important! :)
(15) Document your experience! =) Don't forget to bring your camera!
Saw long-time buyer Anisa during the Brown Bag Market 2010, just had to take a pic with her! :)

(16) Establish goodwill with the organizers. Who knows, they might invite you again or refer you to other bazaars. As to where to look for bazaars, I just search the internet (Multiply!), chance upon them, announce in my social networking sites that I am interested to join (in case someone knows an organizer), or check out the Entrepreneur Magazine which releases bazaar dates during Nov-Dec.
***
After writing these notes down and searching related photos, all my bazaar stints were brought back. :) I remember that I still do get nervous every time I enter the bazaar venue, trolling with me my mannequin and racks. I love this anticipation, will the sales be good today? Just remember, always keep a positive outlook, and things will fall into place. And don't forget iwagwag ang pera ng buena manong bumili!
The Palms Bazaar 2009