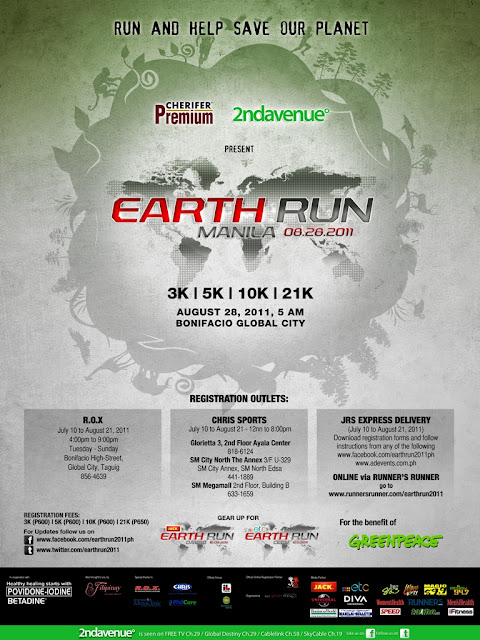 I am super excited to announce ETC, Jack TV, and 2nd Avenue's Earth Run this Sunday!

Now in its third year, Solar Entertainment goes nationwide with three legs to be held in Davao, Cebu...and of course, Metro Manila! Earth Run 2011 has chose Greenpeace as its beneficiary: An international environmental organization.

The Metro Manila run will be held in the Bonifacio Global City Grounds this Sunday, August 28. Runners can choose from four distance: 3K, 5K, 10K, and 21K. All races have a registration fee of P600, except the 21K which is P650. Upon registration, participants will receive race kits that will include timing chip, official race shirt, race bib belt, and race details. I will be giving away TWO race kits to first 5 readers who will tweet me! (@anagon)...I already sent out one pair..So hurry and tweet na! ;)

For interested participants, registration is now on going at R.O.X. at Bonifacio High Street and Chris Sports branches located at Glorietta 3, SM City North The Annex and SM Megamall. Online registration is available at Runner’s Runner (www.runnersrunner.com/earthrun2011), Ad Events (www.adevents.com.ph) and the official race Facebook page (www.facebook.com/earthrun2011ph).
Each race finisher shall receive a special Earth Run sling bag, finisher’s certificate and sponsor giveaways. Trophies will be given to the Top 3 male and female finishers of each distance category courtesy of Cherifer Premium Capsule, while medals shall be given out to all finishers of the 21k race.