THIS is the movie! 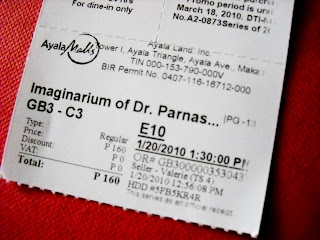 Watched this film with Ana and Tamemeh on my birthday, during the lull time in between the moment we checked out of the hotel, to the traditional family dinner.

I saw this poster in one Tumblr I'm following (vanillachailatte) and was surprised of the star-studded cast! =D

God! Heath Ledger and Johnny Depp in one film! I just have to see this! 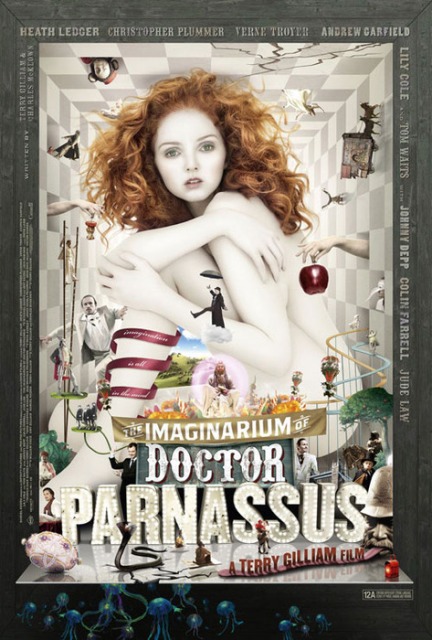 The movie poster is enchanting on its own, kind of reminded me of Moulin Rouge's mysticism and Across the Universe's trippy and unaligned vibes--both turned out to be my favorite films. =) Even the title is hard to remember! :D Haha! And Lily Cole looks surreal!

True enough, I ended the film not knowing what to say, or where I have been! ;p It has it's own pacing and directions! My friends and I walked out of the cinema like dumbstruck kids--lost? =D Unexplainable experience!

Anyway, we were long-way out of the theater, when we started talking again, and Tamems asked me what I can say about the film.

Here's a grasp of what I said--something like the film is on making choices. Well, that was what I mainly got. There's also putting up an image, or dreaming of another life, or a father's love for his daughter, or  I know there's something more beneath it, worth the repeat watching. The film is art! It seems to need viewers who are "high"--trippy, or people who will take their wild wild imaginations with them inside the movie house. I actually like the boggling experience. Visually enticing like the Moulin Rouge--I love the colors, the texture of the film--the stage--old and new! I am not sure what era did these gypsy-ish things existed, but I am attracted to them.

A work of genius! Till I encounter a movie like this again. =p