When I joined the BTS locations tour, one of our stops is a lunch in Yoojung Sikdang.

Yoojung Sikdang is popular amongst BTS fans as this restaurant used to be the go-to place for the boys during their rookie years. In fact, during our BTS tour, we just walked from the resto going to the old Big Hit building! I was imagining OT7 walking the very same streets before.

Sadly, Yoojung Sikdang was closed when I first visited with the tour group because of the Seollal holiday. 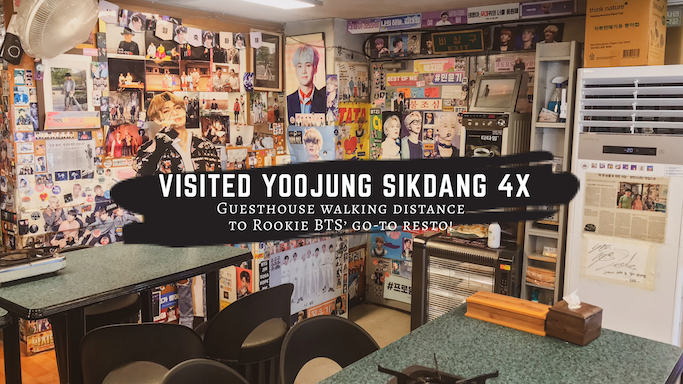 Babies! Pictures of the boys eating in Yoojung Sikdang: 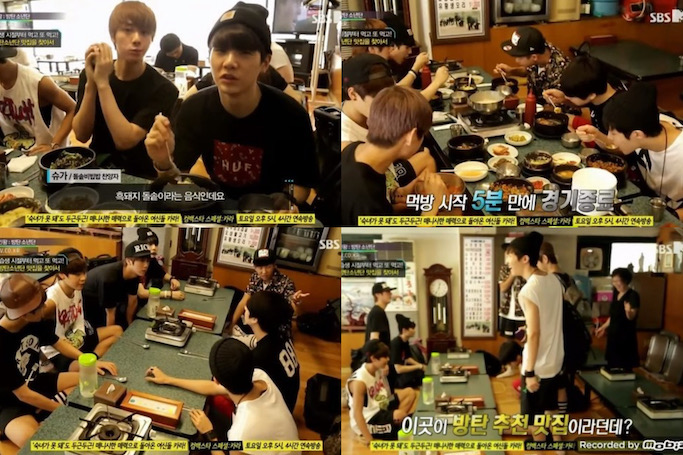 After the holiday, I had out of city trips so I forgot about going back to the restaurant. I think it was on the night of my first day back in Seoul when I searched for Yoojung Sikdang's location on my Google Maps coz the street sounded familiar.

Yoojung Sikdang turned out to be walking distance from my guesthouse! 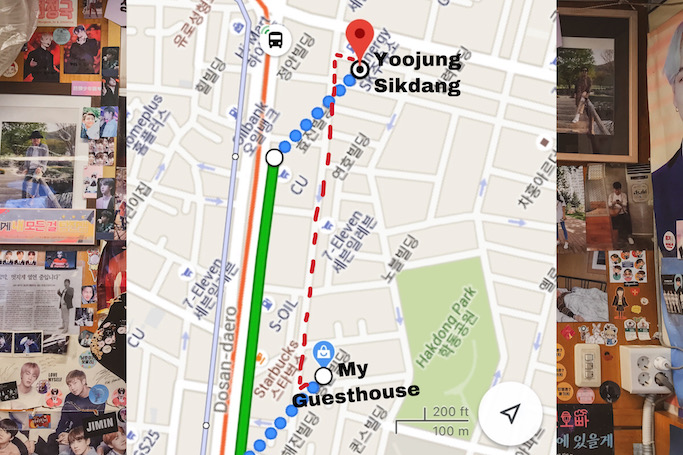 Around my guesthouse are music schools and small agency buildings: 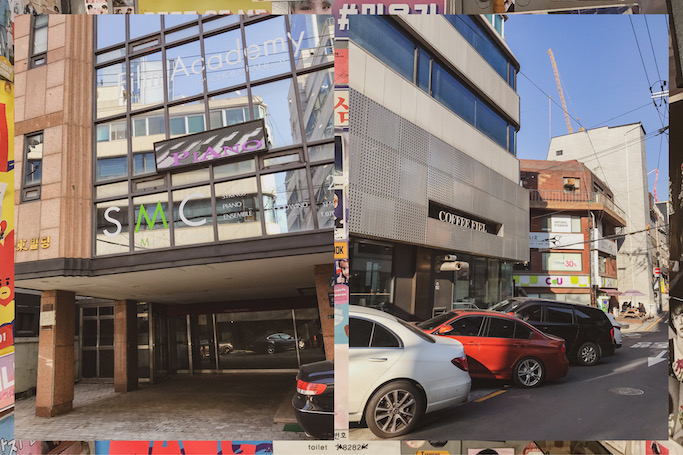 I just walked straight till I reach this street with Yoojung Sikdang's signage, which has the 2 black pigs and green strike background: 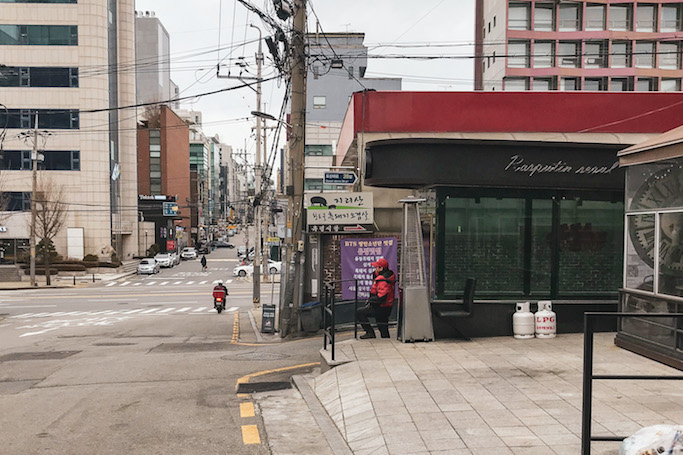 First visit, Yoojung Sikdang was closed but since I was with a tour group, I was able to get a decent solo picture, thanks to my new ARMY friends! 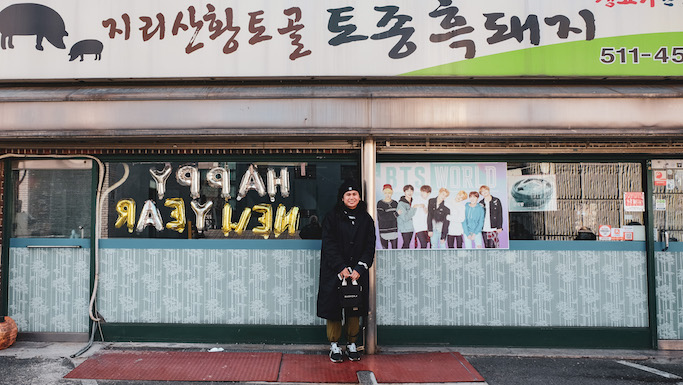 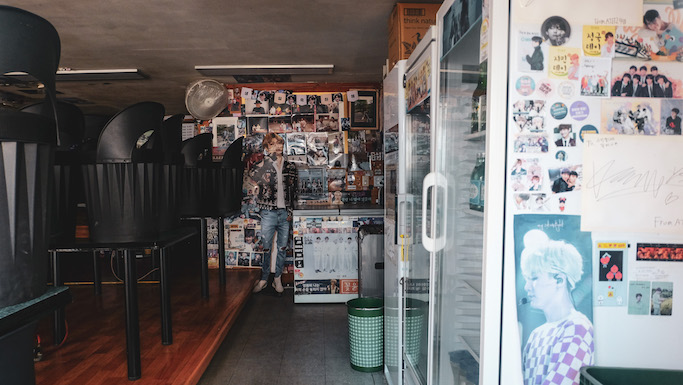 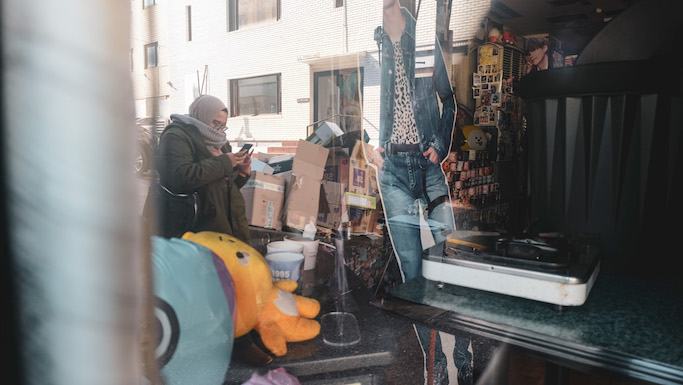 Went on my own during my second visit, just to check if it is really walkable from my place. It was still closed, I think it was the Monday after Seollal.

Third visit and I finally got lucky!

Btw, I always go a little before lunch, which is usually the time I go out of the guesthouse. Fortunately, I never had problems with long lines and cues! 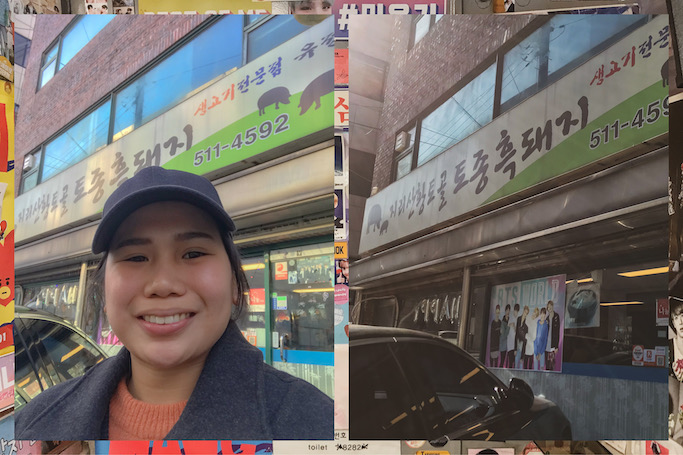 Super happy that I was able to enter Yoojung Sikdang, finally! The restaurant is filled with all things BTS from floor to ceiling, I just love the vibe right away! I think fans from all-over the world contribute to the resto's interiors. There are two girls who approached Yoojung Sikdang's ajumma owner after eating to hand her a TATA plushie keychain. ❤

Here's a sneak peek of how Yoojung Sikdang looks like from the inside: 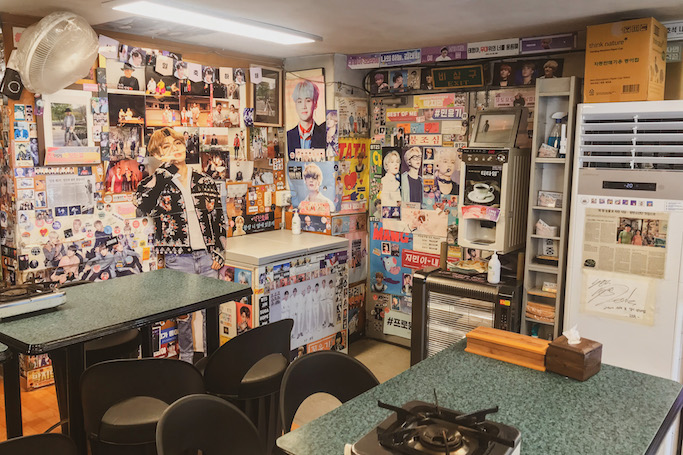 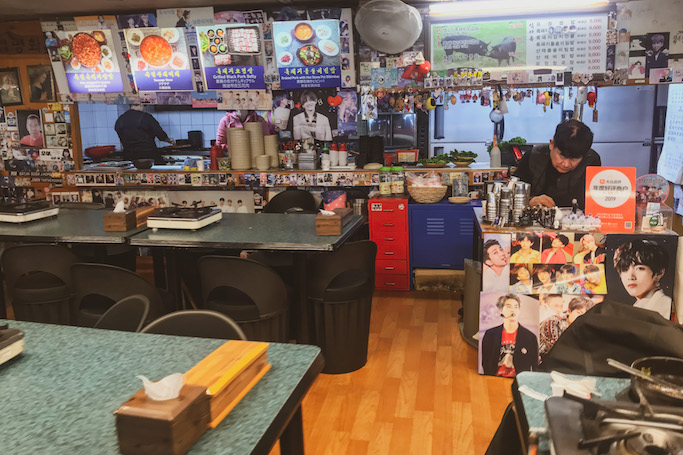 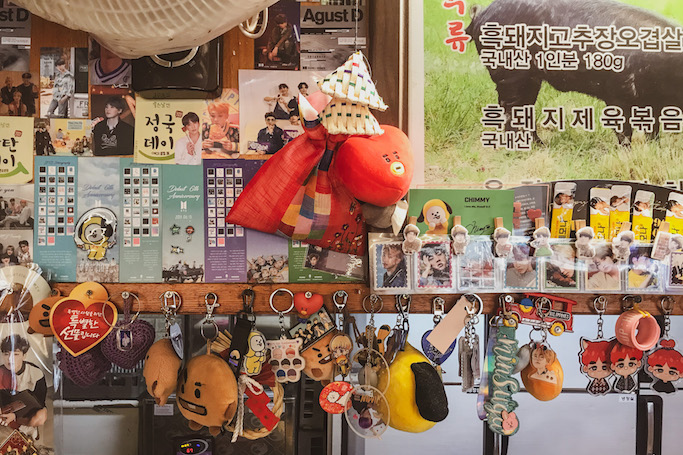 On the other side are more cup sleeves, fan arts, posters, dolls, stickers, and other official and unofficial BTS merch. Sayang I can't take a picture of the full wall because there were other diners, but I guess that's something to check out when you visit this place too! 😊 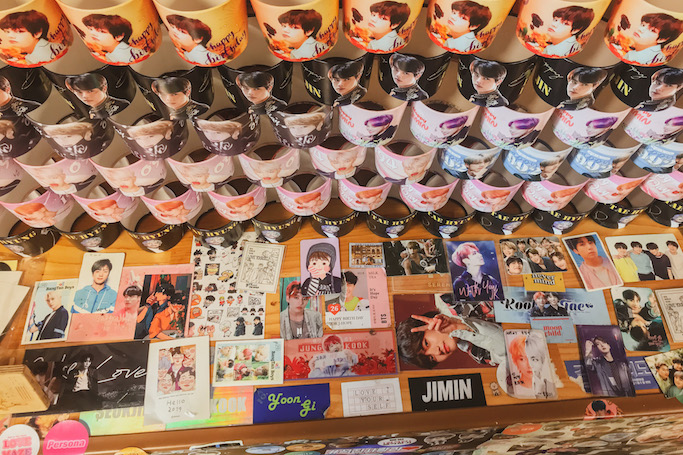 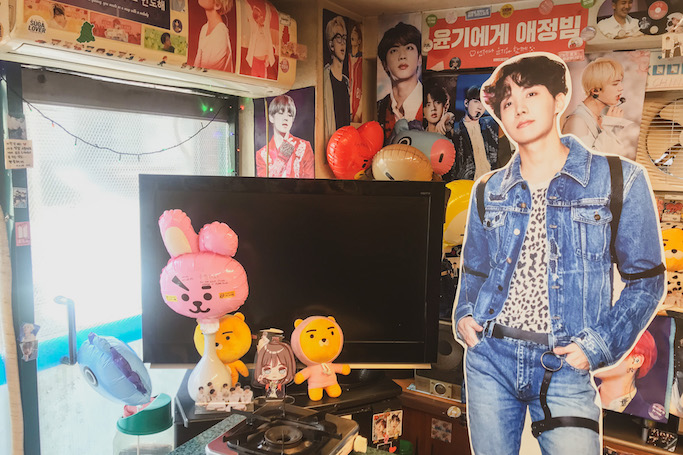 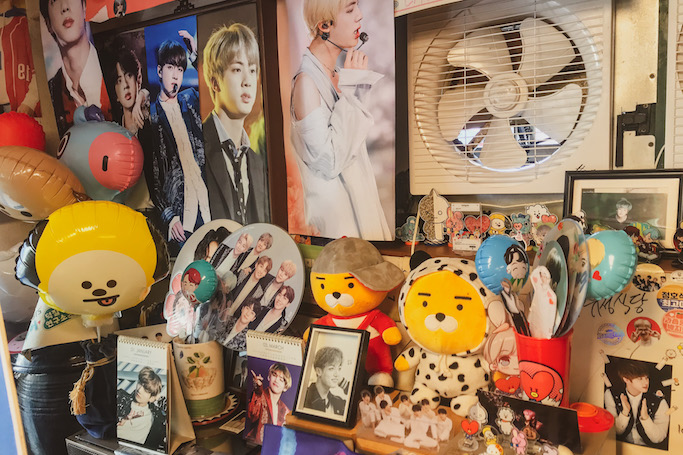 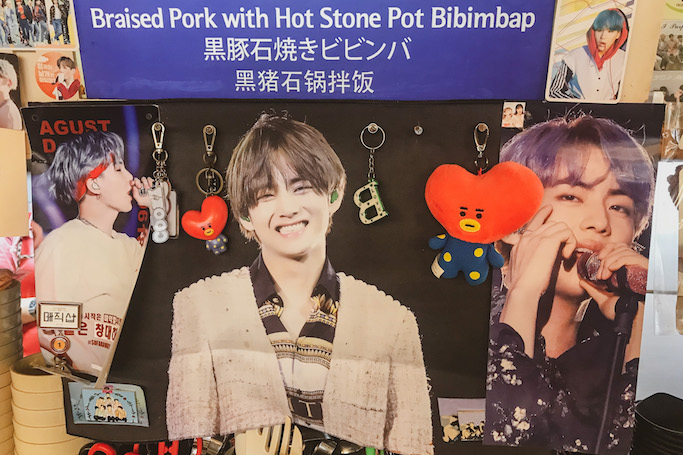 Now, let's eat! The best part is that they have a lot of vegetarian offerings on their menu! 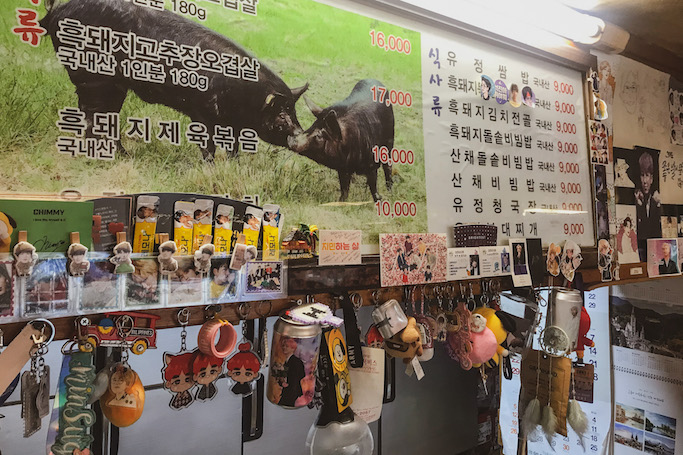 Third Visit
Bibimbap with Wild Vegetables in a Hot Stone Pot. It comes with a lot of side dishes and a bowl of tofu soup so it is worth the price! 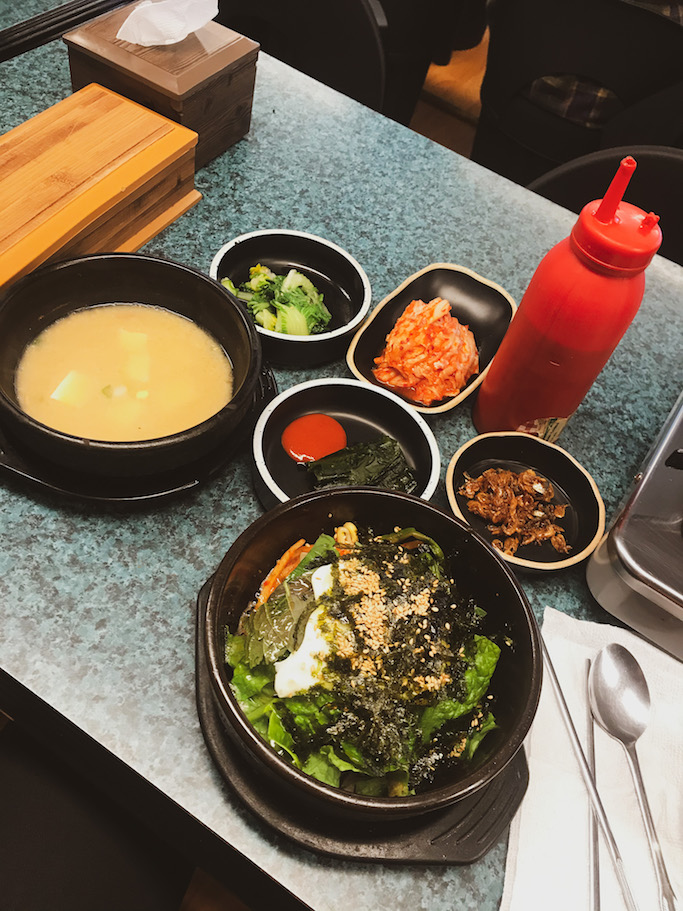 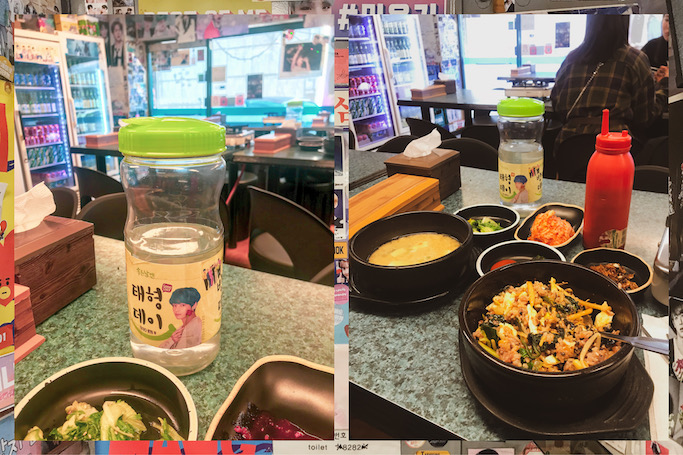 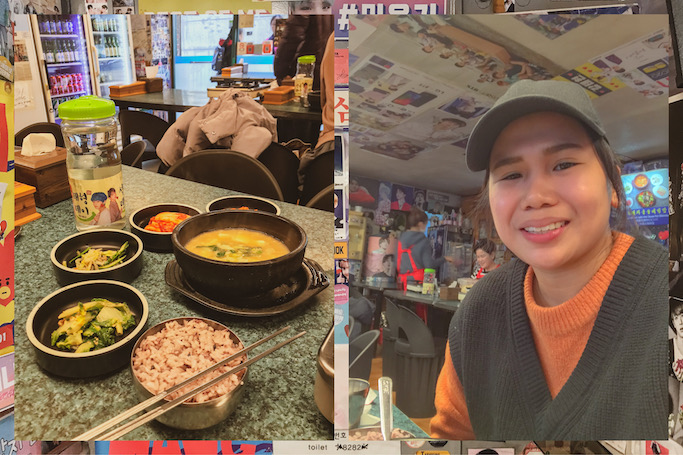 Fourth Visit
Tofu with Stir Fried Kimchi. Did not expect this huge serving size for its price, I wasn't able to finish everything! It's so good though, just like my first order. I wish I dined here daily during my long trip so I can try the other dishes, but this was already my flight day!

Yoojung Sikdang is not only a feast on the eyes, but the tummy as well! 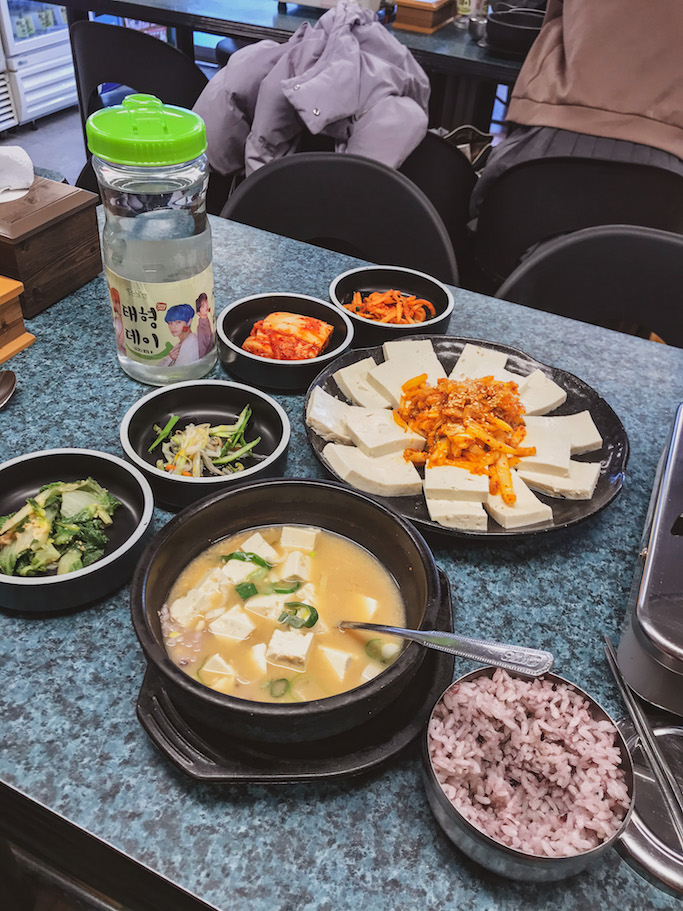 The best part is, on both visits I got Taehyung cup sleeves from ajumma! You don't have to ask for it, she just goes around handing cup sleeves to her diners!

Ajumma can't speak English well, but she tried conversing with me on both times I was there, one was while I was checking out the wall of merch that she's trying to arrange. With my little Korean, I picked up the word chuahae / joahae which I learned from watching Kdramas to mean "to like" hahaha, so I just said "V!"

She also showed me fan art stickers and I think she was asking if I can recognize the fan drawings, haha! Even though we were struggling to communicate, it's a cute and happy moment to converse about BTS in Yoojung Sikdang. 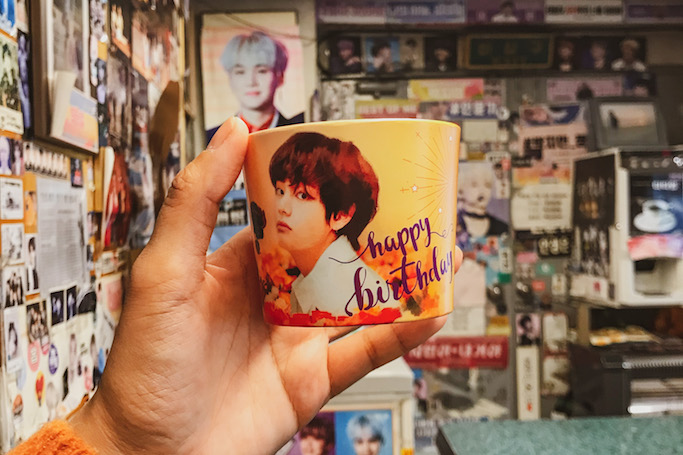 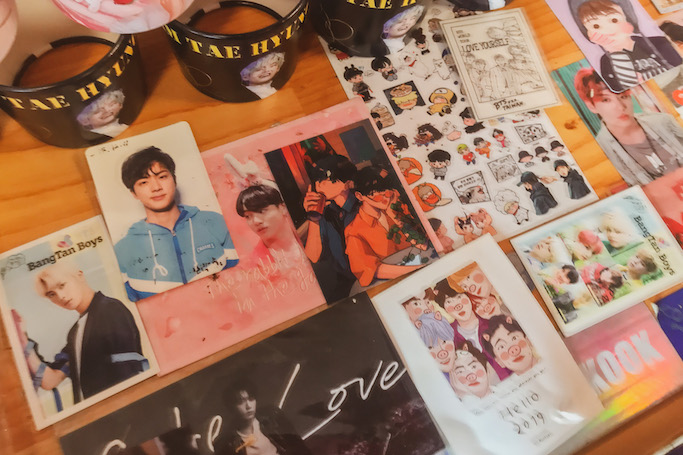 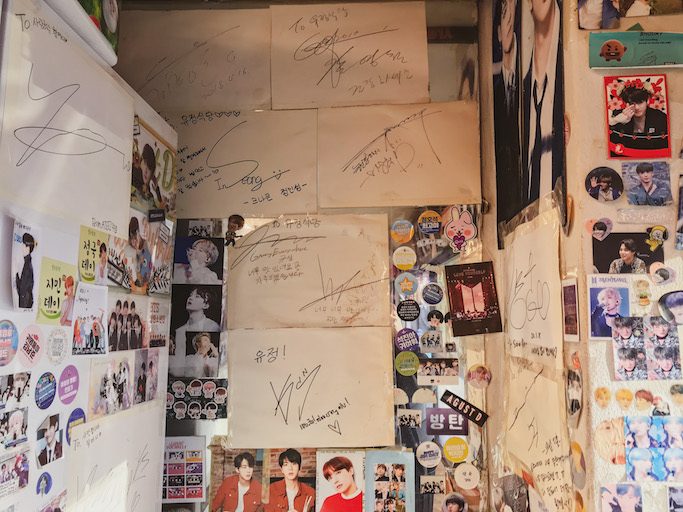