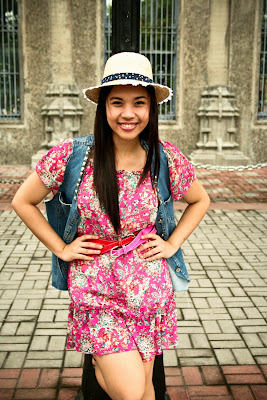 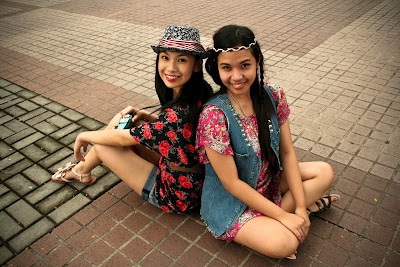 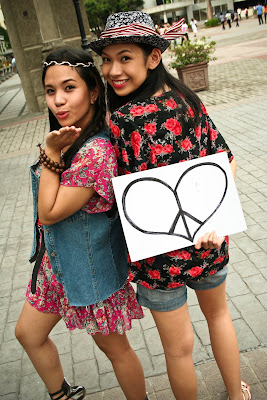 Some photos of the prettiest and easy-to-work-with models CJ and Chesca . My dilemma awhile ago was whether to post them already in my online shop (selling the clothes, hats, accessories!), or to finish my bazaar first this weekend! :D Anyway, time decided things for me, and before I knew it..there's no more time to post in my online shop! ;p
I love the photos! They're taken by Mimi See, assisted by sibling Andrew See who is also a make up artist. We all helped with the styling! =) I think the team did a great great job, loveit!
Whole day was spent fixing stuff to bring, which I categorized into three:
1. Display - coz a poor table and racks will affect your sales
2. Cash Register - or an improvised one: a desk for my packaging, my notebook, tools like stapler, scissors, plies, and for my phone and camera and all my other things that I just can't leave around. ;p What is packrat?
3. Storage - for stocks, coz I can't display everything. Who can display all their stocks in a 3x3 space, which is divided pa since I am only on booth-share ;p Hehe!
I cleaned up an old stereo/speakers desk with layers, it's a small one compared to my Cuenca long table, but I guess the layers will hold the other stuff. I am not super OC, but on these things I can't help but be one! ;p
Other than wiping the dusty racks I'll use (been awhile since I used them! ;))...I also watched the last episode of Wowowee. It was actually sad, you know, even after it became korny or whatever term you'll describe it the past months...that noontime show was a big part of my afternoon routine--back when Showtime was still non-existent. The whole set was teary eyed when they sang Wowowee classics like Boom Tarat and the finale, singing Ikaw Na Nga as tribute to their main host.. They can't even deliver their daily spiels without breaking down. Nakakaawa!
Also, I'll actually miss it! The downfall of a TV show that I actually thought before wouldn't end, srsly!
And oh, it's currently raining, which is scaaaaarrrry! Last time I had a bazaar in Mega Tent Pasig was for the Candy Fair and it was also raining exactly like this the day before....And the storm continued the next day, which was b-t-w infamously became known as THE Bagyong Ondoy. ;p Sana tumila na ulan tomorrow!!!