On my last few days in Korea, I decided to just explore different parts of Seoul per day. Something I've always wanted to do, yung hindi paguran na parang marathon. I wanted to take my time and try the food, the shops, and just aimlessly walk around the streets of just one area of Seoul to get to know it better.

In one particular day when I can't think of anything to do, I decided to focus on Itaewon. I've been here I think one time palang before, and the only thing that I know about this place is that it has a lot of foreigners and it's a party district. I went there last time for the BT21 Line Cafe.

Itaewon (이태원) is a district popular for tourists, expats, and US military personnel. You can reach Itaewon through Seoul Subway Line 6 via Itaewon, Noksapyeong and Hanganjin stations. 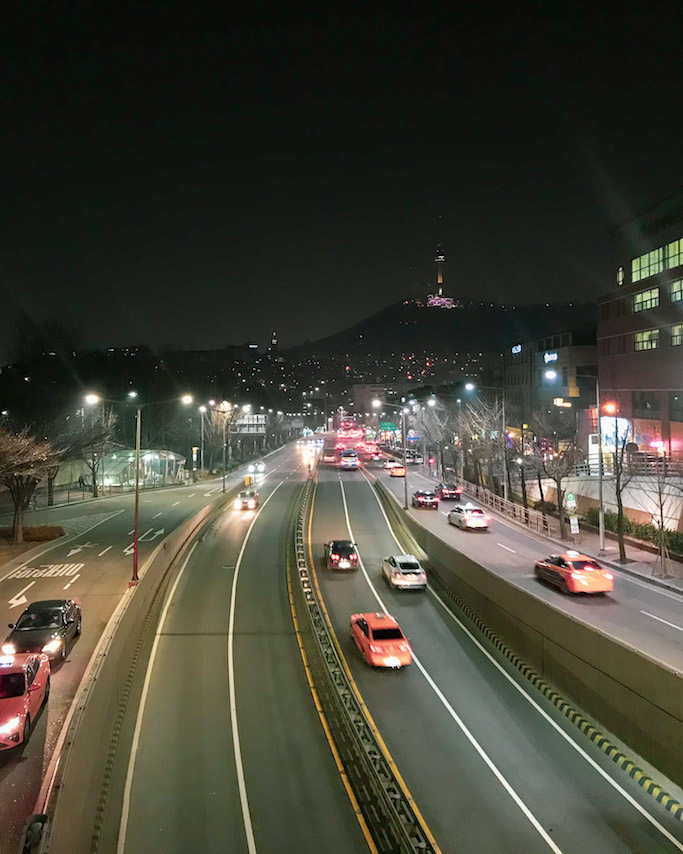 That morning, I had a very bad start after just barging in an ASTRO meet and greet with no information on the ticketing. I thought that I can just purchase a pass on the spot. After asking 3 to 5 times, and waiting outside as I hear the group's introduction, I decided to give up and just walked away for Itaewon. 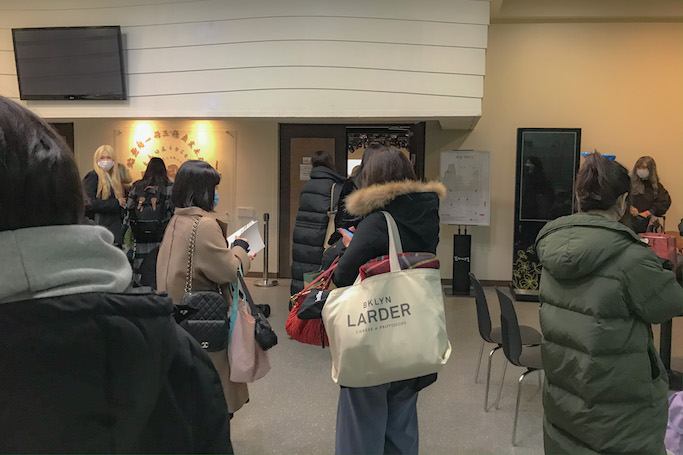 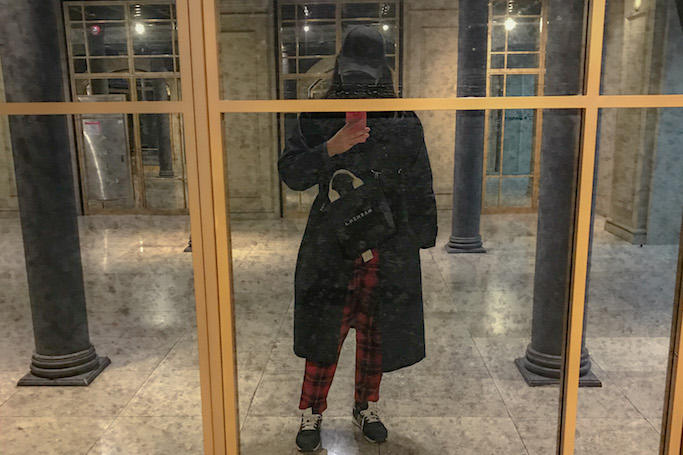 Itaewon is a breath of fresh air. Streets are unfamiliar since it's a place I don't really go back to again and again whenever I am in Seoul. Hindi din ako ma nightlife anyway. But after research, I discovered that they have one of the best vegetarian restaurants in Seoul. True enough, at an awkward time and on a weekday, I had to lineup for a seat in PLANT. 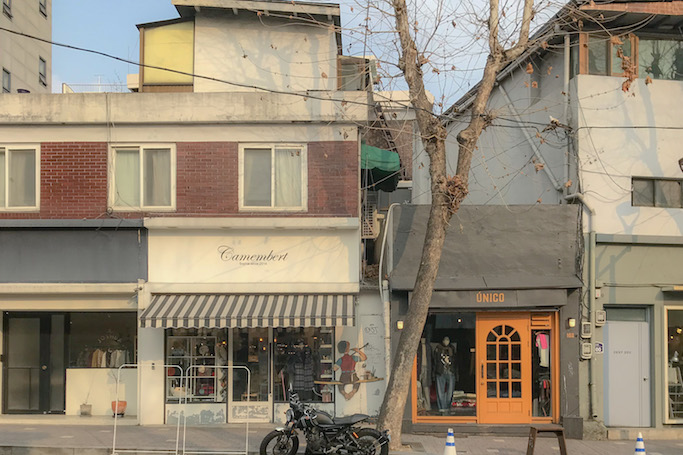 To get to Plant, go down Itaewon Station Line 6, and walk out of exit 4. Follow directions via Naver or Google Maps, Plant is on the 2nd floor so make sure to always look UP! 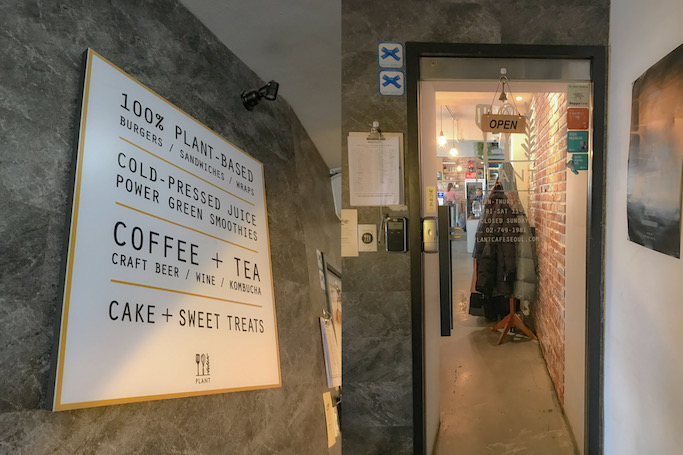 Since I waited in line, I got so hungry that I ordered everything that I wanted! Yun pala sobrang big ng serving size nila dito, it was hard to finish everything. Price is also a bit steep (Spent around Php 1000+), and taste-wise ok naman sya but not super memorable, but will recommend if you're a vegan or vegetarian visiting Korea so you can have a break from bibimbap or ramyeun. 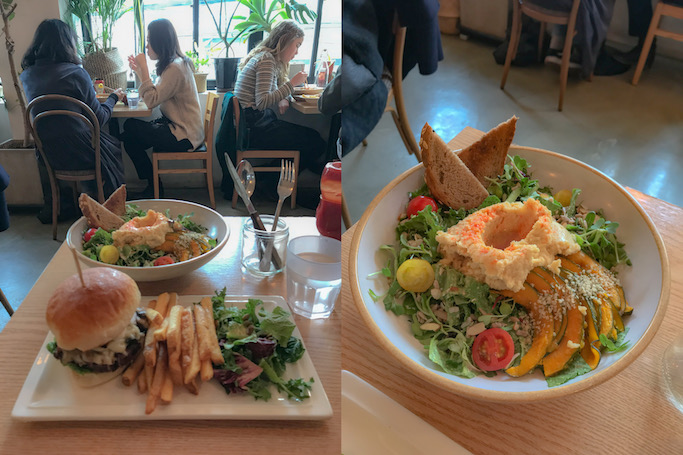 Just outside PLANT is the Itaewon Antique Furniture Street. I just walked past the lanes of small shops selling vintage furnitures and home decors. I saw vintage postcards that I regret I did not buy. Sometimes an empty store intimidates me, so I just passed by it. 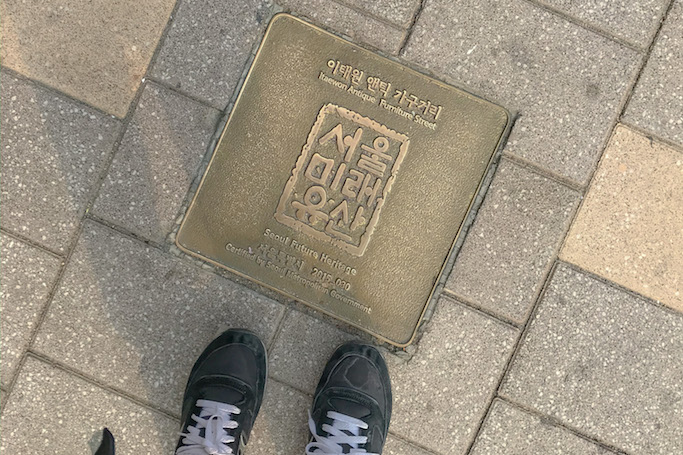 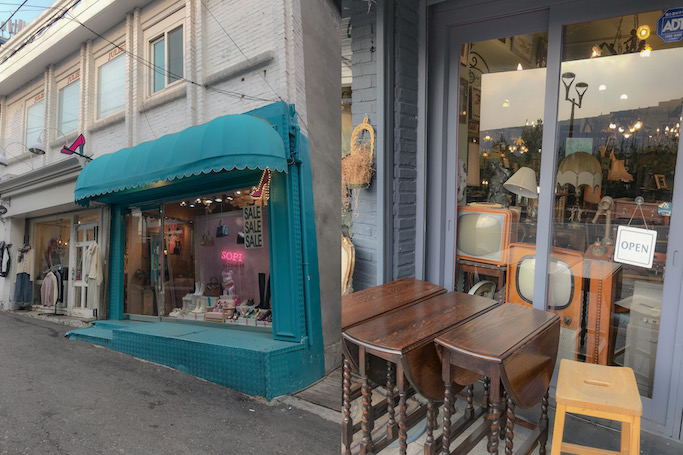 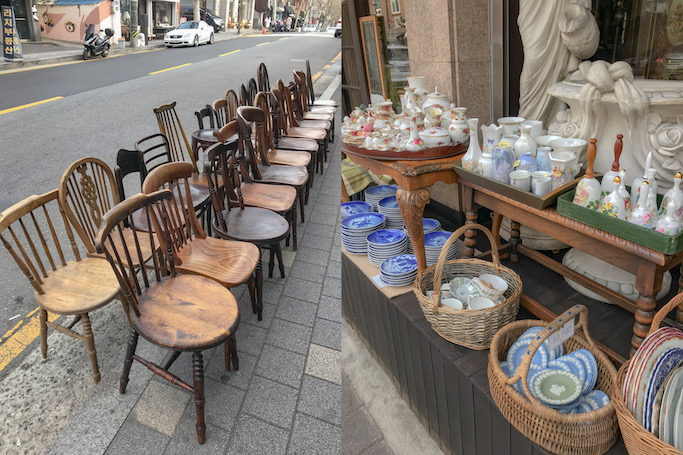 Also passed by these tents with cute doggos, up for adoption: 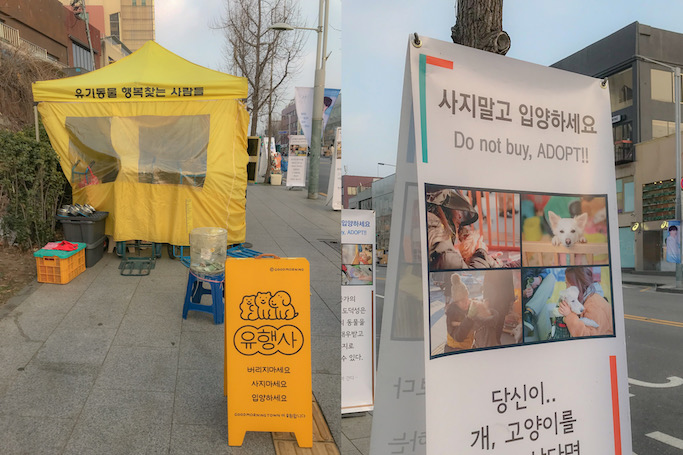 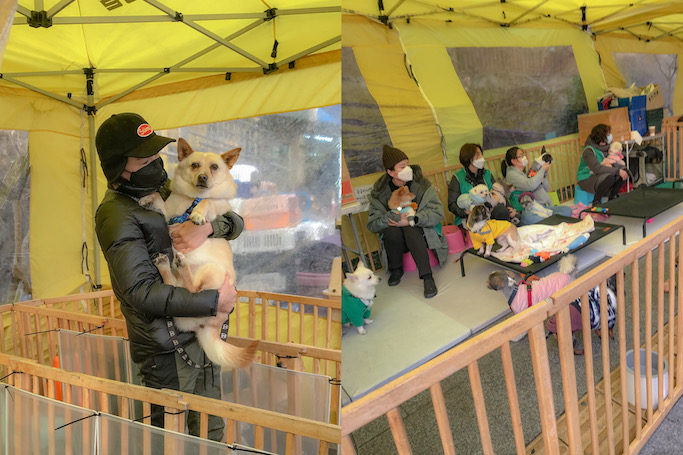 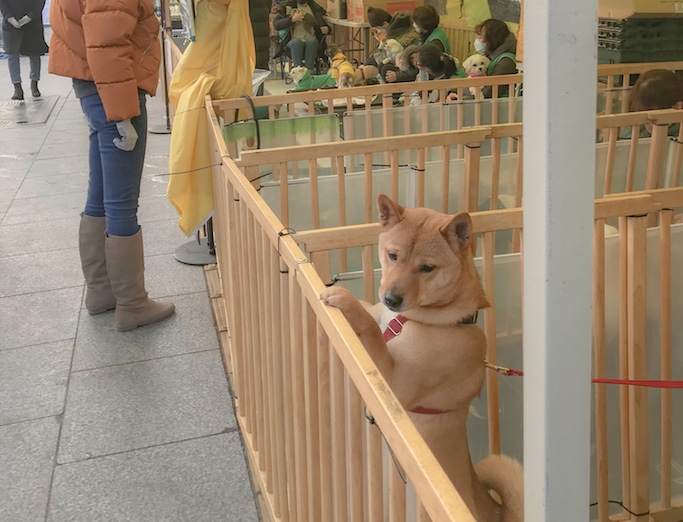 Scored an affordable small luggage here before. It's in front of Daiso, where I spent a huge amount of time too (parang walang Daiso sa area ko, haha). 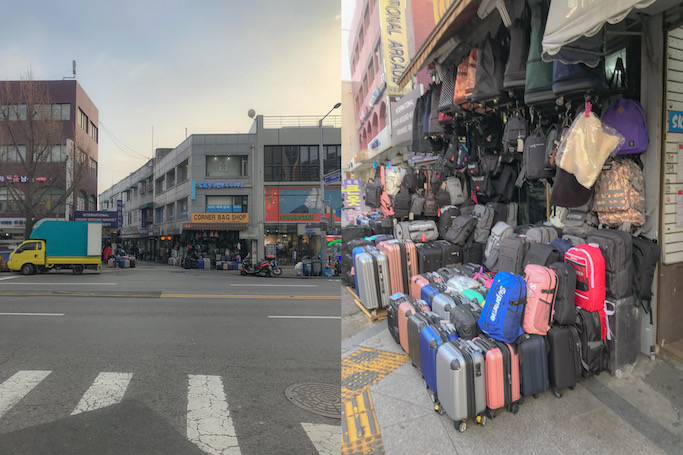 I almost took the train from there, but remembered the coffee shop Ashley sent to me in our group chat that serves art lattes, including Van Gogh's Starry Night.

Decided to make C. Through cafe my last stop for the day then. Like PLANT, may pila din before I was seated in C. Through. Found out that the coffee is worth my lunch already (around KRW 30,000 or Php 1,200!). Ang mahal, but as a Van Gogh fan it is worth it, this coffee is a work of art! 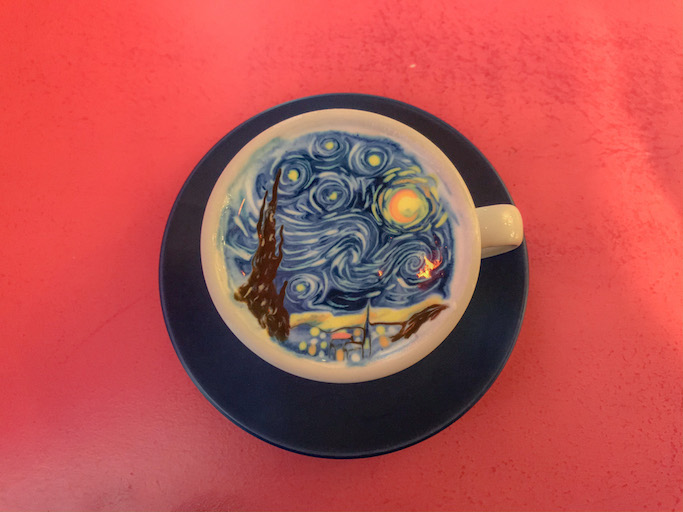 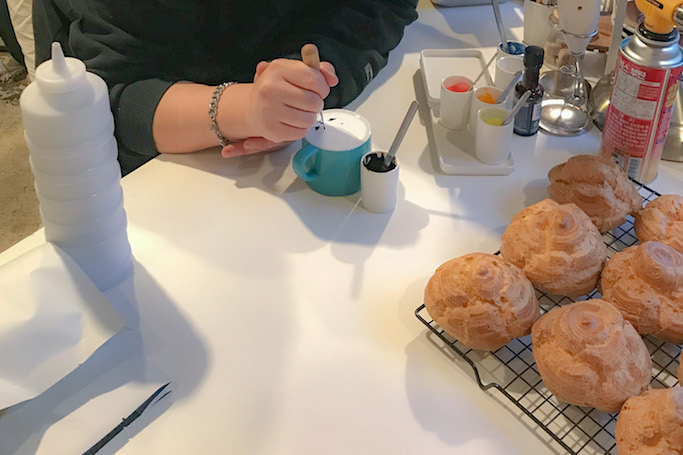 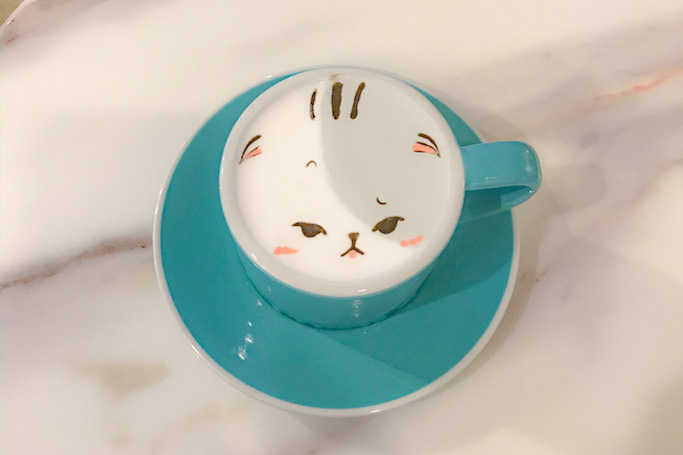 Then my day just got better. I was about to leave C.Through for the train station when someone in the cafe called my name. When I looked back, I saw a Filipino!!

He introduced himself to me as Marc, and he said he follows me on Facebook. Marc just came in the cafe, and I asked if I can seat with him muna so we can chika! It's not something I usually do (as an introvert), but that night I surprised myself! I was just happy that finally, nakapag Tagalog din after ilang weeks! Haha!

Marc works in Korea for I think 2-3 years already. We extended our talk when he asked if I'm interested to join him in a Korean Drama location just a few blocks away from the cafe. With no other plans that night, I said yes right away!

Turns out, the location is the pub inspiration of DanBam in Itaewon Class! Some scenes were also shot here. I haven't seen a single episode of this drama then, but now that I've finished it sobrang thankful ako na sumama ako kay Marc! 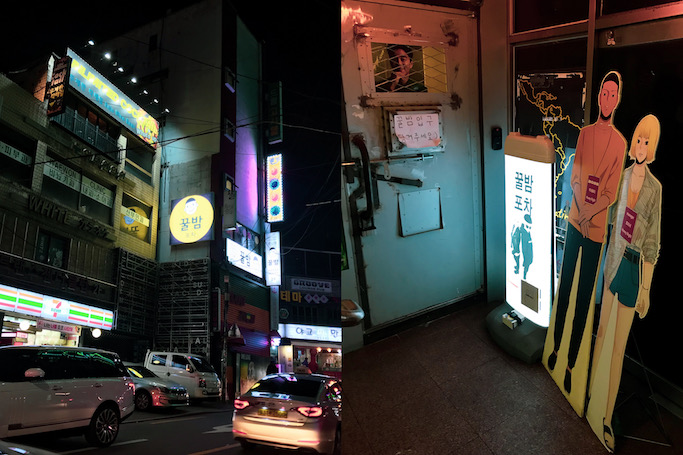 Kkulbam Pocha (or Honey Night Pub) is by Gwang Jin--the writer of Itaewon Class! You will be able to try the menu from the Kdrama in this pub.

We had soft tofu jiggae, and shared a bottle of Cass beer. There are standees of Itaewon Class here and there, plus the pub is packed that night! I super enjoyed the hot meal, and was surprised when Marc paid for it! Thank you Marc for bringing me here and for the treat!!! 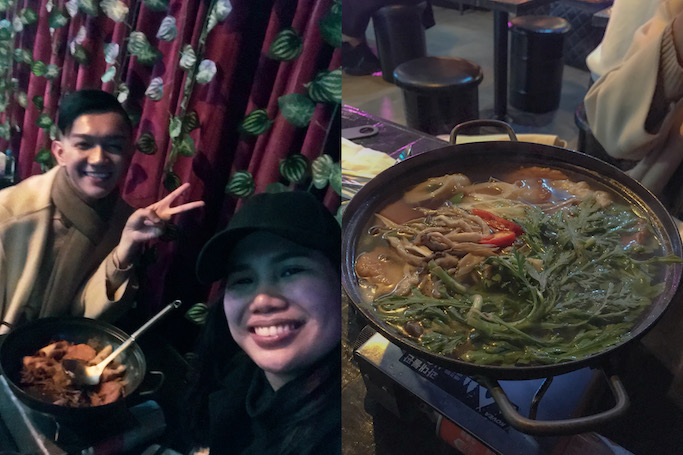 You can check location of Kkulbam Pocha HERE. 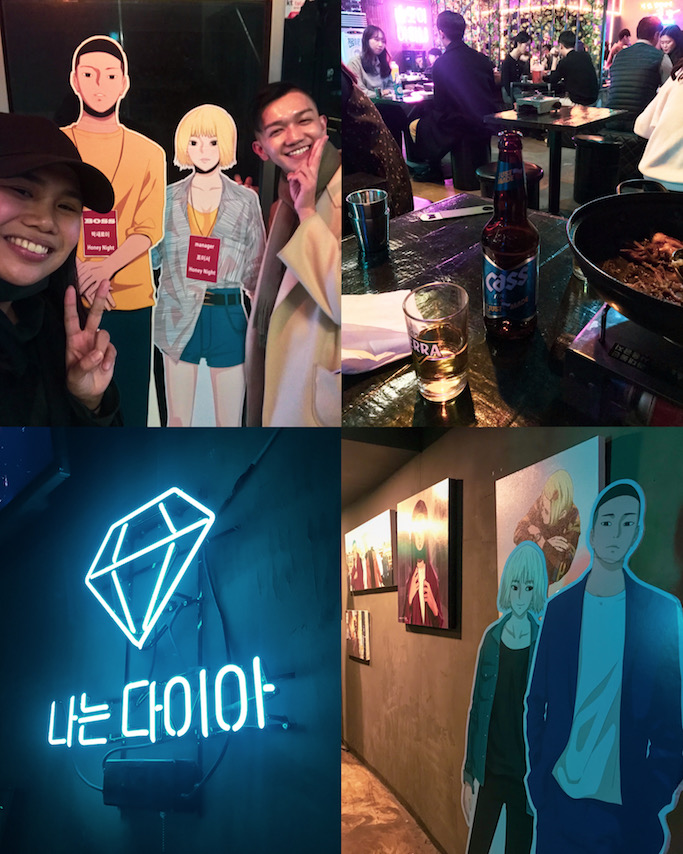 Before heading for the train, Marc asked me if I want to walk around first, and check out the lane of restaurants and pubs that Itaewon is known for. Buti nalang I wasn't KJ that night and said yes coz we passed by a lot of spots that I saw while watching the show now! 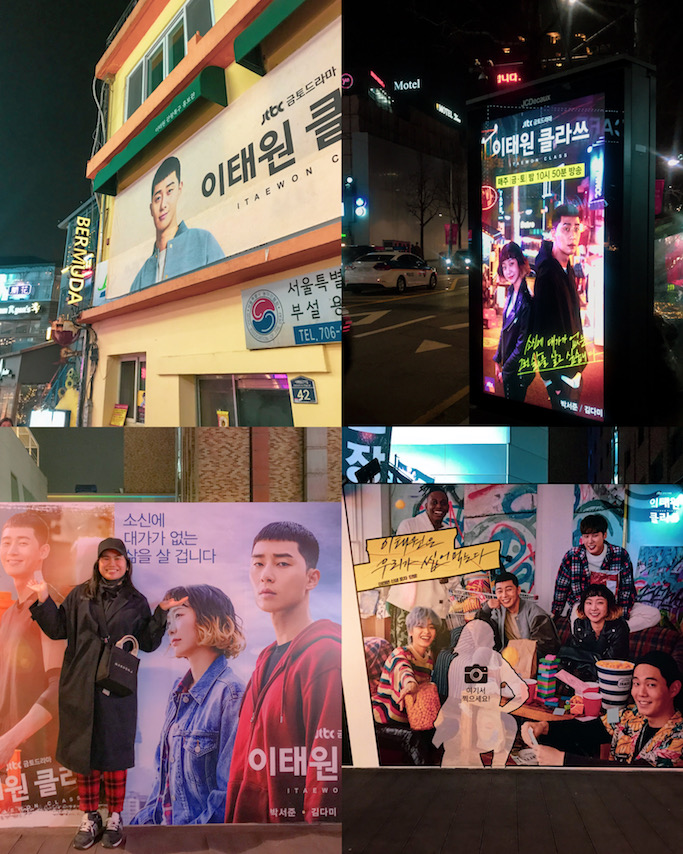 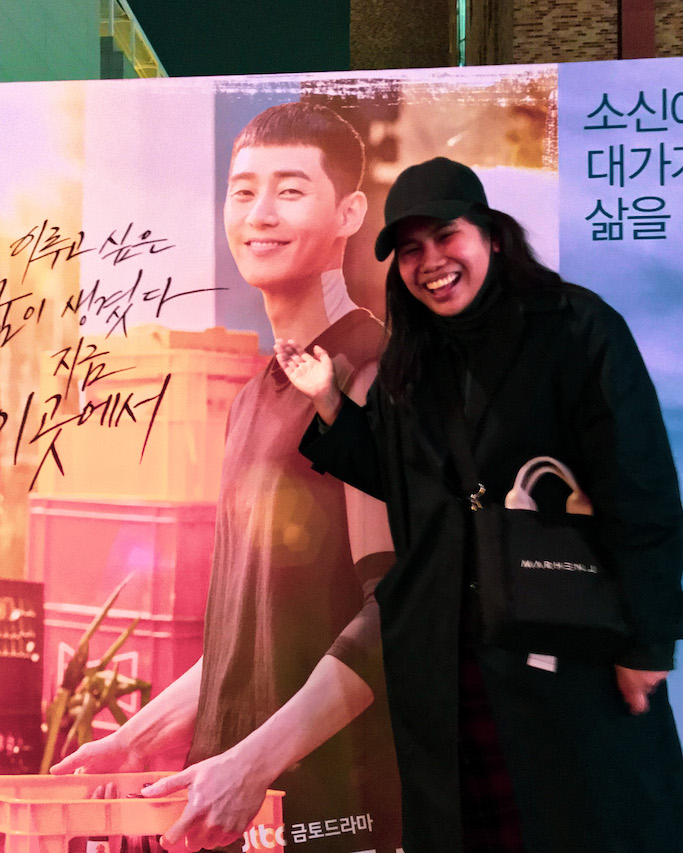 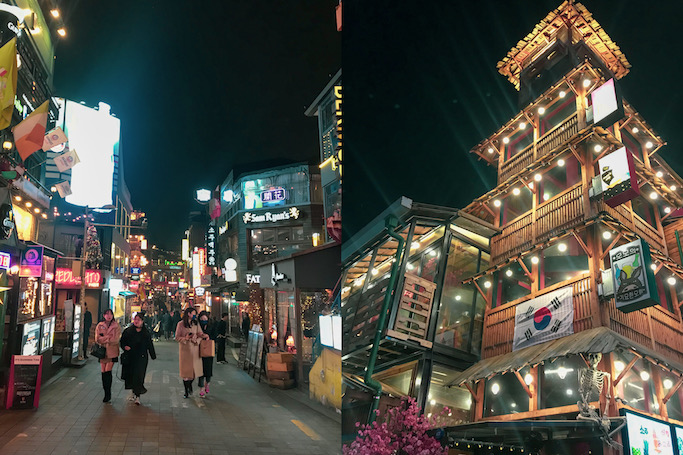 And lastly, we passed by this overpass which appeared several times in Itaewon Class. To get to the Noksapyeong Footbridge, just get off Noksapyeong Station, Seoul Subway Line 6, Exit 2.

The view of the highway leading to the Namsan Tower is so beautiful! Marc described it best as an iconic sight that is "very Seoul". I had no idea that most of the meaningful conversations in Itaewon Class will be shot here, it is indeed a spot that sparks wishful thinking. 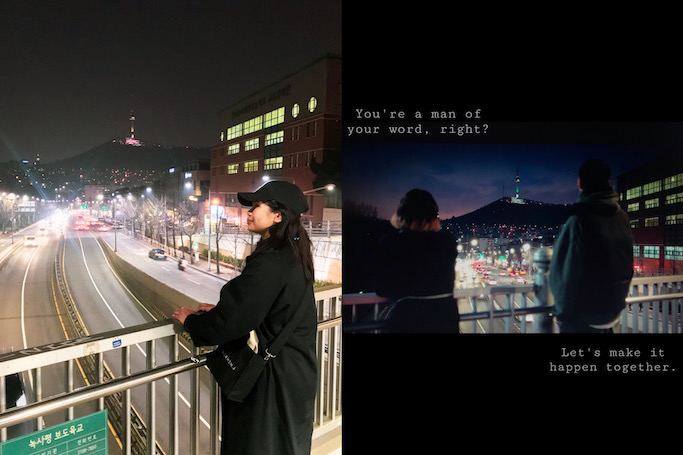 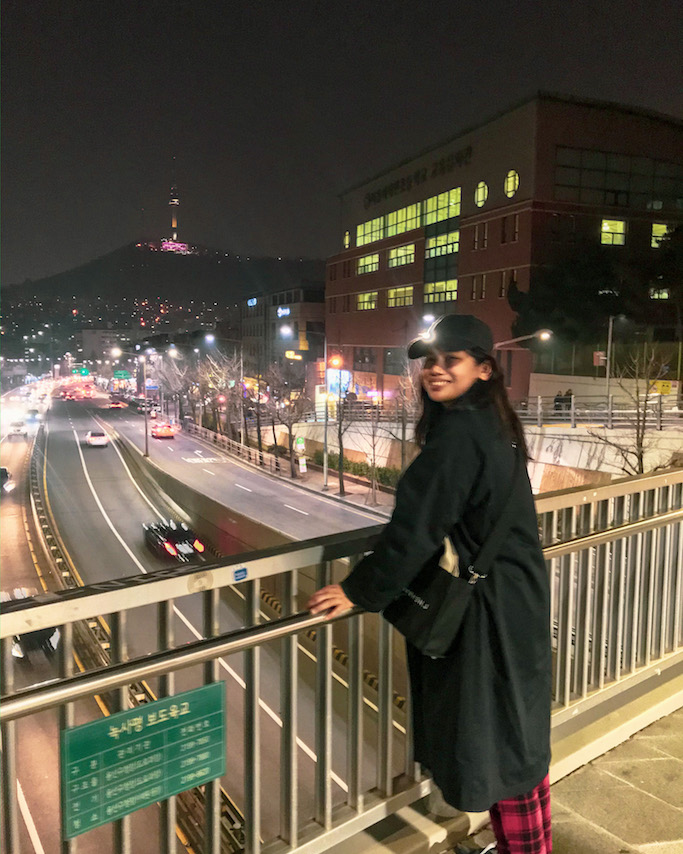 Have you seen Itaewon Class? What are your favorite scenes from this 2020 Kdrama? For me, it would have to be when Saeroyi said to his dad that he has to go back coz he still has a date, Hyo-jin's winning moments on TV, and the last scene when Saeroyi's soju finally tastes sweet. :)